On a sunny August morning, a group of kids took a few hours out of day camp to meet with older adults for a day of music and conversation. This intergenerational event, held at Yesler Community Center in Seattle, was the culmination of Our Time Has Come, an 8-week workshop offered by the UW Memory and Brain Wellness Center that empowers people living with memory loss and their care partners to become social activists in raising awareness about memory loss and dementia in the wider community.“We believe that persons living with memory loss are the experts on what it means to have a dementia-friendly community, and can be active participants in making that happen,” says Marigrace Becker, MBWC’s Program Manager of Community Education and Impact, who created and leads the workshop.This pioneering group of Our Time Has Come decided to work with the younger generation, helping them understand more about dementia but also have fun together as a way to break down barriers. In the workshop, they thought about what they wanted to convey to the children and how to do it. Over the weeks, the participants settled on the message that people with memory loss, amid cognitive difficulties, have different things to offer, can get out and have fun, pursue new hobbies, and enjoy time with friends and family. “Our hope is that kids can recognize memory loss in their grandparents and others,” says Philip Culbertson, who lives with symptoms of Alzheimer disease, “and know how to approach those people in constructive ways throughout their life.” During the group discussion with the kids at Yesler, he shared that he can no longer play his really fast musical pieces on the piano but really enjoys playing slower songs with his adult children and grandchildren.The plan came off without a hitch. After Mary Firebaugh gave her prepared introductory remarks about memory loss, the kids gathered around Paula Schwimmer, a care partner, and her husband Rafe, for a reading of a children’s book about dementia. The workshop group had chosen between six books, considering what images and ideas about dementia would be meaningful, not overwhelming or confusing, to children. For example, they steered away from language such as “scary disease” and pictures of neurons, and leaned more towards real-life examples such as finding clothing in the refrigerator. After much discussion, they ended up voting on Barbara Schnurbush’s Striped Shirts and Flowered Pants: A Story About Alzheimer’s Disease for Young Children. After the reading, the whole group discussed particular parts of the story that resonated with the kids, such as the need to take some quiet time alone in a stressful situation at home. 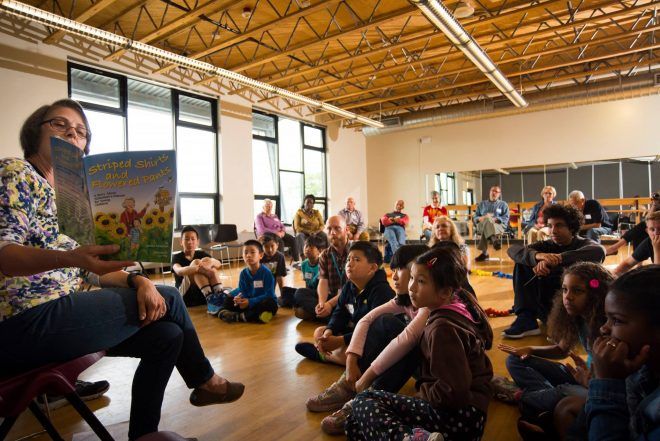 Photo: Ryan HawkDementia-friendly folk dance provided the chance for the kids to share in an activity accessible to people across the spectrum of age and physical ability. In a seated circle dance, led by Susan Wickett-Ford of Silver Kite Community Arts, everyone held onto a stretchy band of rainbow-colored fabric, which they moved up and down, side to side, to the classic Breton folk dance song An Dro Retourné / Chañj Tu. They had to work together and rely on each other to maintain the dance. In the many other dances of the day, Our Time Has Come participants were able to show, instead of tell, the possibility for joy and connection, regardless of age or cognitive limitations. 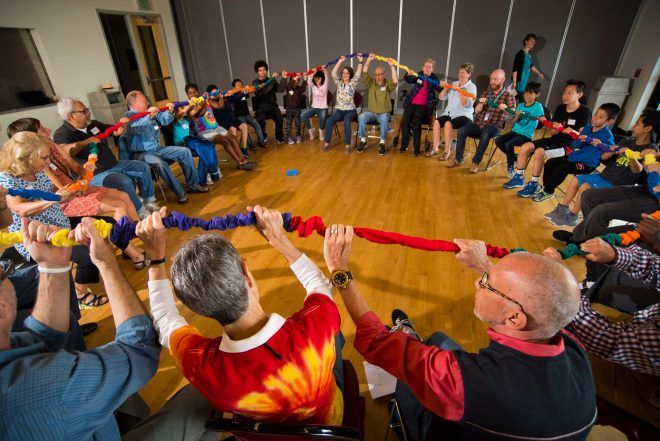 Photo: Ryan HawkOur Time Has Come has its roots in Seattle’s dementia-friendly community. It’s named for a song written in 2014 by a group of people at the Gathering Place at Greenwood Senior Center, an early-stage memory loss enrichment program, during a music workshop with songwriter Linda Waterfall. In her earlier work with the Gathering Place, Becker heard the group express their desire to make change in the community, and facilitated their vision to create an “anti-stigma flyer” which was presented on NPR and beyond. She has dreamed ever since of facilitating more opportunities for empowerment and advocacy.At the UW MBWC, she got the chance. Support from Jefferson Terrace of Seattle Housing Authority, Seattle Parks and Recreation, Yesler Community Center, the Associated Recreation Council, and Silver Kite Community Arts helped secure the space, schedule, and personnel for the workshop and final project. “Our Time Has Come really became a magnet that draws together intriguing partnerships,” says Becker.In reflections on the project, each participant expressed feelings of accomplishment, pride, and pleasure. “It was fun to see the kids open up to the experience of being with older people, which there can be some fear around,” says Schwimmer. There was also a sense of astonishment. “We are sort of in awe of how far we’ve traveled since the first day,” says Firebaugh. “I was a little skeptical of the goal at first. We really did it.”The UW MBWC Community Education and Impact program plans to offer Our Time Has Come on a regular basis, while training other facilitators to offer the workshop. “Ultimately, I want to see more and more of these workshops happening all around the world, simultaneously,” says Becker. “But I’m happy to start here in our state. The time has come to recognize that people living with memory loss can lead the way in building communities that are welcoming, understanding and accessible to all.”This story was originally published by UW Memory and Brain Wellness Center. Click here to learn more the Center’s Community Events and Programs.Related PostsThe New Dementia Story Part 2: CharlieEvery day, we can choose to continue telling the old dementia story, a story that condemns and terrifies, a story that adds burden to an already challenging journey. Or, we can choose to stop and listen. There’s a new dementia story being told.Seattle’s All-inclusive Dementia-Friendly ‘Momentia’ Movement GrowsFormed as a coalition of “community partners,” Momentia’s purpose is to empower people with memory loss and their care partners to remain connected and active in the community. Central to the movement’s philosophy is its positive perspective on dementia and a collective determination “to transform what it means to live…Disrupt Dementia With Us – Day 2As we weave what we learned in Seattle into the script for Disrupt Dementia 2017, we hit the road with the goal to inspire the creation of inclusive and kind communities by sharing what is possible when we learn from elders.Tweet31Share96Share9Email136 SharesTags: Alzheimer’s Disease Disrupt Dementia Momentia Seattle